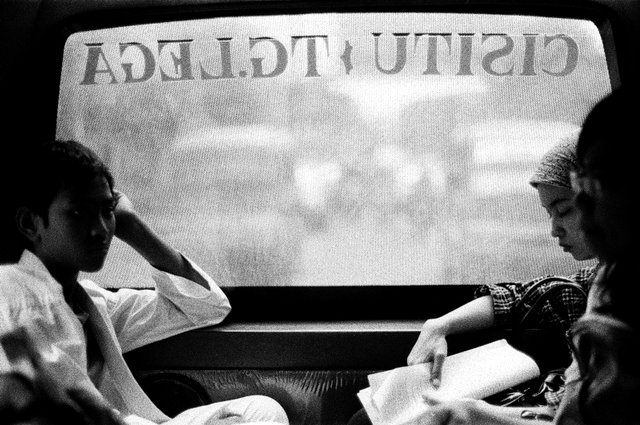 As a 24 y o modern woman, my most significant inability #2 is driving (if you wonder, #1 is cooking). I simply can’t drive. I’ve been spending most of my life with public transportation. I take bus or angkot or (sometimes, when I unusually wear make up) taxi or ojek or bajaj or everything else. And I don’t mind walking (actually I like it, being pedestrian).

I don’t want to brag but really, I can afford a car. If you ask me why I don’t drive, then my only answer is because I don’t really want to. And until now, I don’t really feel that I need to. I know that as soon as I start to drive, I’d drive anywhere. I will be more selfish than I already am. Not that I say that everyone who drives is selfish. It is just about being less connected to people, I think.

I learn a lot about life inside public transportation. I learn about going earlier in the morning and not going back home too late. I learn to be careful and modest about things I bring (yes, it is not always safe). I learn to be patient when it comes to the wait, as public transportation system in our country is hardly ever on time. When it comes to Friday evening (the most hectic period in Jakarta’s traffic), I learn that no matter how much money I have compared to the person standing next to me in the bust stop, we’ve got to chase the bus together. All seat are available at the same price and everyone has the same chance. There are times when the bus is full and some people keep pushing to get in. I hate it but sometimes, I become one of those who push to get in. At the end of the day, everybody just wants to go home.

I also learn a lot about people and society. I learn about the mutual relation between the drivers and the passengers and how we depend on each other. It’s not only about the money but also about a presence. I learn to mean every, “Excuse me” I mention to other passengers  and “Thank you” to the driver. I learn to have some faith in strangers.

Oh yes. I met a lot of strangers; on the queue for Trans Jakarta, on the bus, inside the angkot, by riding ojek, and so on. When I was in junior high school, my school was far from home that I took angkot early in the morning together with guys bringing chicken alive to the market. I met kids to the elderlies. I met criminal and got my cell phone stolen once. I met those who might be less fortunate yet having brighter smiles than me. I met a mother with children that got me wondering about her husband. Some people easily talk to me. Some were in hurry. Some were to busy to worry. Some just look through the window in silent.

The most important thing is: I learn a lot about being grateful. When I’m stuck, standing  cramped on the bus full of people or sitting bored with after-office-hours aroma, I know I’m not alone. I know I’m not the most pathetic person in the world running late for a meeting or a date or a reunion. I’m never stuck in the traffic, driving alone together with thousand of people inside their own cars cursing the traffic while being the traffic itself.

That is that, Maera. It is not that I tell you not to drive. Maybe I’ll learn to drive, later, so I can drive you to school. Maybe I’ll learn to drive so I can pick up my husband from the office just like the other wives do. Maybe, later; and when I do, you should remind me to be less selfish again. To look around and become a part of society again instead of the traffic.

Note: The photo is taken by Eric Setiawan, a wonderful yet humble guy who takes wonderful yet humble analog photographs. I met him in Bandung during and I adore his works, and so would you. He and his two friends that I also adore, Budi Sukmana & Dicky Jiang, found Black Man Ray project. He kindly shared this photograph so I can write more to you. Thank you, Mas Eric. (Oh yes, if you want to see more of his photos, please visit his Flickr)

It’s been some time since the evening I wrote this,

An End of Another Semester

This semester is ending soon. Monday will be my last day of final exams, and on Tuesday we will visit a dam. From the 8th of June we would spend a month in Karangsambung and act like a true geologist. As the rest of long holiday flies, a new semester comes. My 7th.

Tonight I walked in the campus; from the north gate, to the south. The low light touched a part of my heart; where memories are kept in unalphabetical order. It’s been almost 3 years of falling in love with the configuration of a life phase: myself, my friends, and everything in between.

The low light and the empty path reminded me when it was full and bright. I could picture us there, then I felt like everyone is leaving, and younger strangers are coming. Another semester is coming.

And the first day I countdown to the day of seeing the aurora would be the first day of missing a life phase. That I think I do already.

Every time I step my feet in this city, after opening the mini-bus door or getting off of the train, such great relief rushes into me. A relief… of knowing that this city is still here, becoming part of thousands sagas and million pieces of memory. Memory of the lasting residents, university students, or holidaymakers coming for either strawberry or factory outlets. Memori Beauty Salon or Dago Street. Super-markets or a traditional one across our street. Coffee or not-coffee. Post office near Banda and the piazza and the alley with illegal indie CD-s. Meters of cloth and street tailors. Raining or not-raining. Street musician with violin and flower sellers on Saturday night. Sunday morning in Gasibu or Friday Market in Salman.

A relief that… this city is still the same little dot on the map. A relief that… even the spaces between cars and humans get narrower each weekend, there’s always some left for me, for writing; writing my own saga.

A relief… of arriving.

A relief… of coming home.